Edward Ross, his choice of weapons for this sessions included:

Shooting Off Road in the Canadian Rockies with Profoto

We set out to test the limits of on location lighting with 4-time Canadian National Enduro champ Marty Halmazna. The goal was to test all of the features of the Profoto B1’s with the Profoto OCF Magnum and OCF Zoom as compared to the Profoto Magnum Reflector and Zoom Reflector 2. We also tested the beast know as the Profoto Telezoom Reflector for its unique ability to throw the light further into the distance with more power.

Our goal was to create several unique photos in a limited time and in tough terrain. We wanted to shape light, harness and enhance the power of the light all the while keeping up with one of the fastest sports on the planet.

The first shot was a simple portrait on a ridge overlooking the terrain and background Marty would be riding in. The backdrop of the stunning Rocky Mountains would frame the rider – but we added two B1’s  to light the bike and rider. For the first light we added Profoto Telezoom Reflector – which throws the light further and more directionally but also adds about 1.5 – 2  stops of power to the B1. The second light filled in the front of the bike for the right with the Profoto Magnum Reflector which added about 1 stop of power.

Together with the HHS (high-speed sync) feature of the B1’s  – we could control every element of the shot. We were able to shoot with a shallow depth of field to blur the background while having enough punch in the light to over power the ambient light and create dramatic directional light on the subject. (Tech – 100 ISO – F-3.2 – Shutter 1/4000 sec.  – Light – Profoto B1 with Telezoom @ Full Power – Profoto B1 with Magnum @power level 9.

For the next shot we turned off the HSS – and went for pure power. Using a high aperture of f-22 with a shutter speedof 1/200s we underexposed the sky but created a unique star burst with the sun to frame Marty. The first shot without flash shows an interesting silhouette, however the subject gets lost in the back ground. The B1 with the Telezoom modifier had enough power to light our subject while also maintaining the deep, dramatic sky and star burst.

For our third setup I wanted to control contrast while showing Marty in his natural environment descending a hill. My assistant for the day – Kallos Studio Manager Fred hiked down the steep hill and set up as a human light stand with the B1 and the Profoto Telezoom. As Marty approached the light froze him and created separation from the contrasty lighting of the terrain. The crispness of this directional light source really pulls him off the background.(Tech: Shutter 1/2500 second – Aperture – f-2.8 Canon 70-200 Lens. ) Lighting – Power 8  – Profoto B1 with Telezoom @ 40 degrees zoom)

We continued further down the hill, and came to a location with an extremely steep hill climb. One of the biggest challenges was to get our lighting into position. The terrain was steep and the rocks were very loose – so patience and safety were our main concern. I found a spot on a eroded cliff to shoot straight down from and wanted to show the difference between shooting available with a 1/200 second shutter speed and using HSS with the Profoto. We choose to use the two OCF modifiers as they were lighter and easier to maneuver in the steep terrain.

First image is the ambient shot – and it really shows the speed of the sport as the Marty is quite blurred.

The second photo was taken in the same location but by using the HSS feature I was able to light and freeze the action – and was able to include a sense of scale and location by including the far mountains and river. To be able to expose a shadowed foreground with a much brighter sky and background is something that requires a lot of power – and the two B1’s with the Profoto OCF reflector’s delivered. (Tech) – Shutter – 1/1600sec – Aperture – f-4 with Canon 16-35mm F4  Lighting – (2)  Profoto B1’s one with the OCF Magnum Reflector  one with OCF Zoom – Power Level 10 on both lights.

The next location was a few kilometers up the road in a beautiful wooded area. I wanted to explore the versatility of the light so decided to use the second curtain sync feature of the light. By having the light fire at the end of the exposure opens up some creative ways to showcase the speed of the sport . As Marty would race up and down the trail – I would pan quickly as he passed and trigger the B1 equipped with the Profoto OCF zoom reflector on the opposite side of the trail. The light fired with consistency and we were able to create some fun motion blur shots – with the subject still frozen in the moment.LIGHTING – Profoto B1 with OCF Zoom Reflector – Power Level 7.

We were losing ambient light fast at this point and I wanted to take a shot with the sun backlighting the location. To add some separation for the rider and still give a sense of depth to the shot, Fred set up to the far left of Marty and lit him and the trees with a ProFoto B1 and OCF Magnum. I like how the trees in the mid-ground all got lit up as well.

With the sun setting fast we headed back to the first location with the ridge overlooking the valley. I wanted to test the range of the Profoto remote so I sent Marty and Fred to the a ridge a few hundred feet away – and pulled out my Sigma 150-600 sport lens. We go lucky with the sunset but it was very contrasty and difficult to separate the rider from the background as you can see in the first ambient photo.

With the OCF Magnum still on I had Fred light him from the right – and with the power I was able to underexpose the sunset and still light the bike and rider . Tech – 1/200 second at F 14 Sigma 150-600 Sport Lens.Lighting – Profoto B1 with OCF Magnum Reflector – Power level 9.

Final shot as it was getting dark was to create a fun backlit image with the Profoto B1 and OCF zoom reflector behind Marty as he rode up the hill.
Lighting – Profoto B1 with OCF Zoom Reflector – Power level 6 Tech – 1/125 second at F 6.3  Sigma 150-600 Sport Lens.
All in all a great afternoon and evening of shooting. Trying out the different modifiers from Profoto gave me flexibility by adding more power as well as allowing me to shape and control the direction and intensity of light.

The only way to see what is right for your vision is to understand all of the light shaping tools at your disposal. My results show that there really is not a one size fits all solution. For maximum throw and power there really is nothing else like the  Profoto Telezoom Reflector and Profoto Magnum Reflector. However with a small sacrifice of power for portability the OCF Magnum and OCF Zoom Reflector are great choices for remote location photography.

Special thanks to Marty Halmazna, Kallos Studio, YourProfoto, Profoto Canada and Fred from Kallos Studio. And a big shout out to Michael Klekamp of www.cameraoperator.ca for filming the shoot. We asked a lot out of everyone on this session and I am very happy with the final results. 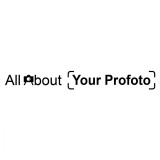 Your Profoto is your one stop for everything Profoto. It is a division of Kallos Studio where we dedicate product demos, and feature local Profoto artists via YYC inspiration stories.

We provide referral services in photography, cinematography, makeup and hair by connecting the clients to the local artists. We also connect artists with other artists through Profoto academy and our local seminars. Our mission is a mutual growth for the artistic community for all image creators.